A jacket is a short, lightweight overgarment generally made up of sleeves and some form of collar with a center-front fastening, closed by a variety of means. The lengths, fabric, cut, and purpose of the jacket has evolved throughout the centuries, from its origins as the doublet of the Middle Ages to the vest and knee-length coat ensemble championed by King Charles II and, eventually, the tailored garment of contemporary fashion.

While the elite continued to prefer the long coat as a formal garment, the laboring classes wore a shorter jacket for reasons of practicality. By around 1840 the shorter jacket was considered acceptable informal wear for the gentleman, particularly with the introduction of sporting jackets such as the Norfolk jacket.

Before the nineteenth century, women tended to only wear shawls, mantles, or cloaks outdoors. However, the Victorian-era Rational Dress Movement, which espoused the wearing of practical clothing in place of the restrictive corsets and crinolines, popularized the tailor-made jacket that was based on masculine tailoring. From this point onward, the jacket remained a key element in every woman’s wardrobe.

A perennial symbol of youthful rebellion, the black leather motorbike jacket was adopted by the motorbike gangs of the 1950s, epitomized by Marlon Brando in Laszlo Benedek’s 1953 movie The Wild One. The motorbike jacket was first introduced in 1928, and Brando reputedly wears the Perfecto Model 618, a lancer-fronted jacket designed by Irving Schott and named after his favorite cigar, the Perfecto. The leather motorcycle jacket had military connotations and was adopted by the Army Air Corps prior to World War II.

The Nehru jacket was created in northern India, possibly in Jodhpur, Rajasthan, in the 1940s as the band gale ka (Hindu-Urdu for ‘closed neck coat’). The high-standing collar of the Nehru jacket, based on the collar of the achkan – historically the royal court dress of Indian nobles – is cut close to the neck. Named after, and popularized, by Sir Pandit Jawaharial Nehru (1889-1964), the first prime minister of independent India in 1947, the Nehru jacket first gained popularity in the West in 1966, following the adoption of the style by musicians such as the Beatles.

An item of British sporting dress, the tweed single-breasted Norfolk jacket is constructed with vertical box pleats at the back to facilitate raising the arm to fire a gun. Endorsed by the sartorially influential Edward, Prince of Wales (later King Edward VII), the oldest son of Queen Victoria and Prince Albert, the Norfolk jacket was named after the county of Norfolk, the site of his country residence.

First seen in the late nineteenth century, the safari jacket is based on the British khaki drill uniforms worn in warm climates. The belted jacket features the distinctive ‘bellows’ pocket, with an expansion pleat, applied to the outside of the garment. It was subsequently adopted by big game hunters such as Denys Finch Hatton before Parisian designer Yves Saint Laurent rendered it fashionable when he introduced the safari jacket in neutral linens in 1968. It was particularly popular with the release of such films as Sydney Pollack’s 1985 movie Out of Africa. 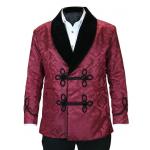 In 1860 Edward, Prince of Wales, requested that Henry Poole, Savile Row’s most prominent tailor, cut off the tails of his evening suit to create a more comfortable smoking jacket, thus creating the first modern dinner jacket. In 1886 James Potter wore a version of the jacket to his club in Tuxedo Park, New York, resulting in the style being called the ‘tuxedo’ in the United States. Parisian designer Yves Saint Laurent introduced the female version of ‘Le Smoking’ in 1966.

This waist-length style of jacket first appeared in the 1970s, when George, Second Earl Spencer, removed the tails from his tailcoat. It was adopted as part of mess dress – military  formal eveningwear – and in 1820, the prestigious British independent boarding school Eton College appropriated the jacket for first-year students’ uniforms. The style was adopted by bellhops and waiters, and the jacket continues to be used as part of military mess dress and in the service industries.

Designed to resist wind chill, the lightweight windbreaker, more commonly known as the ‘windcheater‘ in the U.K., features elasticated cuffs and waist – occasionally formed from ribbed knitted fabric – and a center – front zipper fastening. The term ‘windbreaker’ was the brand name of gabardine jackets produced by the John Rissman company of Chicago. They are now made in high-performance fabrics for comfort and durability. Throughout the nineteenth century, civilian clothing for men and women imitated military uniforms in cuts and decorations, including the zouave jacket, based on the French Zouave uniform. The short embroidered jacket or bodice, cut with or without sleeves, gained the most popularity during the 1850s, when French Zouaves were fighting in the Crimean War, and during the American Civil War in the 19860s.

New In From Patek Philippe At Weir & Sons This October

H&M SPRING 2021 DRIVES INNOVATION IN SUSTAINABILITY FURTHER — WITH A...

H&M SPRING 2021 DRIVES INNOVATION IN SUSTAINABILITY FURTHER — WITH A...

Our Ondine Beauty Report Under €30

Fiona Faherty - May 1, 2019
0
Too Faced is a brand we love here at Ondine Magazine , American Beauty Cosmetic company made by Jerrod Blandino and Jeremy Johnson has...
BEAUTY

Fiona Faherty - April 23, 2018
0
Too Faced is a firm favourite of many Make up Artist and loved by Kylie Jenner before she began her make up line. Too...